This is the grave of WilliAm B. Smith that was supposedly responsible for converting the Schrunk’s to RLDS. According to a note by this picture in the book Aunt Mabel Banks gave me! I was hoping this would scan better so dates could be read but it says “WilliAm B. Smith Brother of the Prophet Joseph Smith born at Royalton (not sure what state) March 13, 1811 Died at Osterdock (again I can’t see very well but assuming Iowa) November 13, 1893. 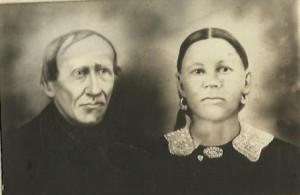 Diane Schrunk Kaup:  This is John Frederick Schrunk and Josephine Hammond and Uncle Francis told that these two were the ones responsible for our family being members of the Reorganized Church of Jesus Christ of Latter Day Saints. Written on the back is the story although since it was written in pencil it is very hard to read but Uncle Francis typed it out and gave it to Aunt Mabel Banks who pasted it along to me! I have also heard the story about being scolded by the Catholic priest for eating… before taking the sacraments. This story came from the Schrunk’s living in and around Osterdock, Iowa! But I have heard from Uncle Francis that John had a dream and in this dream he saw all his sins hanging on the wall unforgiven which cause him to search his Catholic beliefs which lead him to seek other denominations. I am not sure which is true but I am thankful they were lead to the RLDS Faith!

Lois Schrunk I tried to tell the story I heard by way of e-mail but can recieve but not send. Anyway will try again. I don’t know where I heard the story of why they left the Catholic church but the one I heard goes like this—eather your great or great great grandmother had to walk to church and in those days the Catholics had to fast before communion and maybe they still do—anyway the lady ate before she walked to church and then confessed what she had done to the priest who severly reprimanded her and that is the reason they left and yes, Monte I believe they joined the Presbyterian church. Ellis doesn’t remember this story and Alva has another story with the reason they left—that one involved a vision.

Monty Schrunk:   I’ve been doing some searching on Iowa Genweb and other sites, trying to confirm dates and details, and based on the evidence I find it appears that Uncle Francis might have stretched the family connection to the RLDS church a bit. John F and Josephine were listed in church minutes as founding members of the Hopewell Cumberland Presbyterian Church (1856), and John is still listed (as Frederick) as a present officer of the same church in an 1882 history of Clayton County. Josephine, having died in 1863, would certainly have been a part of this Presbyterian Church to the end of her life. It’s possible that John F. separated from the Presbyterian Church to join the RLDS church later, but considering his long relationship with the Presbyterian Church and his responsible role within it, I don’t know how likely that might have been before his death in 1891. According to the Obituary for Lucy (Lucette) Schrunk, wife of Thomas F., she joined the RLDS church in 1893 – two years after her father-in-law John F. Schrunk had died. My suspicion is that our family connection to the RLDS church began on June 11, 1893, with Lucy Schrunk. According to the transcription of John’s words on the back of the picture, it doesn’t sound as if Thomas was active in any church so perhaps Lucy carried the spiritual torch for the family.

Please edit this list. We should also add more Second cousins – please let me know if you can do this… 🙂 Email Sandi
Read More about “Second Cousins – Robert Earl’s Line”…